Keith is an amazing bass player and teacher. He has performed all over the world with a wealth of top artists. In addition, he’s an exerienced educator of not just the bass but also music in general (ear training, composition and arranging).

Over the coming months, Keith will be running an array of courses ranging from beginner Boot Camps to intermediate-level courses and advanced masterclasses. 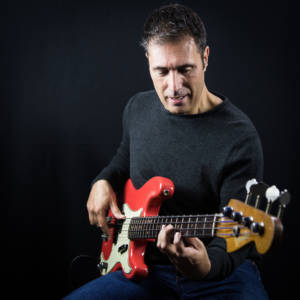 Having enjoyed a successful playing career since, Keith has a wealth of recording. broadcasting and performing credits to his name.

As a performing musician, Keith has toured the world and taken in so many prominent venues, but the highlight of his UK work includes appearances at The Royal Albert Hall, Birmingham NEC, Wembley, Knebworth, Download Festival and T4 Party in the Park.

Keith is also a very experienced music educator. From being on the faculty of a leading Music School, through to eaching in universities, colleges and schools, delivering Bass specific workshops & seminars and also broader music subjects such a harmony, composition, arranging and aural studies, he’s covered most of the bases in the past 40 years.

He has also set up his own teaching bass guitar Youtube channel – Academy of bass.

You can check out more about Ronnie in the about us section. ...

Although known as a country guitarist and singer, Lee has in fact played most styles of music, having played jazz-flavou ...

Graham has been fixing, setting up and improving guitars of all persuasions (and associated gear) for 30 years. He has p ...

Tom is a guitarist, bassist, arranger and producer based in the UK. His performing work encompasses musical theatre in L ...

As a composer Stuart’s fingerstyle guitar work has appeared on TV shows around the world, most prominently on several ...

Gary is currently teaching music at Harton Academy in South Shields and previously at City of Sunderland College Shiney ...

Lin has performed in a wide variety of both live and recorded settings throughout the UK and Germany, ranging from solo ...

Jamie is a graduate of the Guildhall School of Music and Drama in London and won BBC Radio’s 2001 Guitarist of the Yea ...

Originally from Carlisle, A.J Moore gained his BPA (hons) in classical guitar from Leeds College of Music before moving ...