Jamie started with us in 2015 and has run a diverse set of courses including: Rock, Rhythm, Own a Jazz Standard, Blues to Jazz, Intro to Gypsy, Blues Primer, Improvers, Learn an Intermediate cong, and many more as well as Festival workshops. 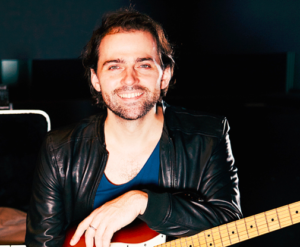 Jamie is a graduate of the Guildhall School of Music and Drama in London and won BBC Radio’s 2001 Guitarist of the Year. He’s very active in London’s West End and regularly plays the Book of Mormon and Beautiful, having previously played Thriller Live and the UK premier of The Color Purple.

Recently returned from European/USA tour with Roisin Murphy and has has featured live and on-record with a multitude of other artists including Tokio Myers, Una Healy, Will Young, Nell Bryden, Simple Minds, Jools Holland, Melody Gardot, Kid Creole, and many more.

As a composer and his guitar playing and arrangements have featured in many dramas and film scores around the world and frequently contributes to international radio & TV.

Jamie also leads his own band and performs frequently as a soloist around the UK; these vituosic live shows explore his interest in the gaps between various genres.

Tom is a guitarist, bassist, arranger and producer based in the UK. His performing work encompasses musical theatre i ...

Graham has been fixing, setting up and improving guitars of all persuasions (and associated gear) for 30 years.

Although known as a country guitarist and singer, Lee has in fact played most styles of music, having played jazz-fla ...

Originally from Carlisle, A.J. began playing guitar at age 12. While interested in all styles of music it was in clas ...

Lin has performed in a wide variety of both live and recorded settings throughout the UK and Germany, ranging from so ...

Gary is currently teaching music at Harton Academy in South Shields and previously at City of Sunderland College Shin ...

As a composer Stuart’s fingerstyle guitar work has appeared on TV shows around the world, most prominently on sever ...